This creamy vegan soup is filled with delicious plant based ingredients and is easy to make!

This potato leek soup recipe is filled with some of my favorite plant based soup ingredients.

If you're looking for a hearty comfort food recipe, look no further. This incredible recipe tastes like creamy mashed potatoes but in soup version.

Not only is this soup delicious, but it's also really easy to make with just a few simple steps.

Leeks: To be fully transparent, I almost never use leeks in my recipes. If you're new to preparing and cooking with leeks you can check out this article all about leeks.

In this recipe we are using just the lighter green and white part of the leeks. Instead of throwing out the darker green version, I recommend washing and then storing them in a large ziploc bag in your freezer to make Vegetable Scrap Broth.

Potato: I used three medium Russet potatoes in this recipe. I did peel them before cooking in order to get a creamier consistency.

Onion: I used a yellow onion in this soup recipe. You can sub a sweet onion in its place if that's all you have on hand.

Garlic: I always prefer to use fresh garlic whenever possible for the best and freshest flavors.

Herbs: I used a combination of fresh thyme and fresh rosemary. If you don't have fresh herbs you can use 1 teaspoon of each dried herb.

Coconut Milk: I make this potato leek soup without cream and use coconut milk instead. Add it in at the end of cooking but before blending and it will give you the perfect pop of sweet flavor.

See recipe card below for quantities.

This easy potato soup recipe is so simple and so delicious, you might just make it all winter long!

Not only is this potato leek soup recipe vegan, but it's also gluten-free which makes it a great option for a number of different dietary needs.

I always start every recipe by washing and prepping all of my produce and ingredients according to the ingredient list.

Then you'll add the olive oil, leeks, garlic, and onion to a large pot and sauté them over medium heat for about 5 minutes or until soft and fragrant.

Next, you'll add all of the remaining ingredients other than the coconut milk and cook on medium heat for about 30 minutes.

Let everything cool slightly before adding the coconut milk and then using an immersion blender.

If you don't have an immersion blender, let the soup cool completely before transferring to a traditional blender.

You can make this potato leek soup crockpot or slow cooker style by simply adding all ingredients (other than the coconut milk) to your crockpot and cooking on high for 4 hours.

Then allow it to cool slightly before add the coconut milk and using your immersion blender to blend it all up.

By choosing to make this slow cooker potato leek soup, it's a bit more hands-off and can free up more of your time for other activities!

If you want to make this less of a creamy vegan soup and more of a chunky potato leek soup, only blend a portion of the soup at the end of cooking.

This soup can be stored in an airtight container in the fridge for up to 5 days.

You can add carrots to this recipe to make it a carrot and leek soup. Simply peel and dice 2 medium carrots and add to the other veggies during sautéing.

Adding white beans to this vegan leek and potato soup is a great way to add some extra protein. Add 1 cup of cooked white beans of your choice when adding the broth.

If you enjoyed this vegan potato soup, be sure to try some of my other plant based recipes next: 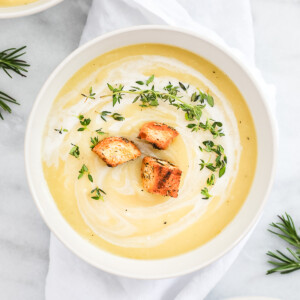 If you do not have an immersion blender, allow the soup to cool completely before transferring to a traditional blender. Blend and then return to the pot to reheat before serving.

About Planted in the Kitchen

Planted in the Kitchen is a plant based food blog. Here you will find healthy and delicious vegan recipes!

Welcome to Planted in the Kitchen