I love this super easy to make plant based sushi bowl recipe as an alternative to vegan sushi rolls.

This is so easy sushi bowl vegan style is so delicious and great to make fresh but also perfect for a healthy and nutritious make-ahead meal.

I've been making vegan sushi bowls for years before I switched to a plant based diet because they are so yummy! I have always enjoyed plant based sushi and this is so much easier than making rolls and requires less equipment and skill.

Rice: I used sushi rice in this recipe and added a mixture of rice vinegar, sugar, and salt to the rice after cooking it to add some great "sushi flavor".

It also calls for freshly sliced mango which adds a great burst of fresh flavor and creates the perfect balance of salty and sweet flavors.

Protein: I used shelled edamame in this healthy sushi bowl in order to incorporate some plant based protein.

You can also substitute or add tofu into this vegan poke bowl recipe. I would recommend my Sesame Tofu!

Sauce: This recipe calls for a vegan sriracha mayo to drizzle on top. Sometimes it's tricky to find a vegan option in stores, so if you're looking to make some yourself try this recipe!

See recipe card below for quantities and full instructions.

I always start by making the sushi rice because that is going to be the most time consuming part of this recipe.

While the rice cooks, make your mixture of rice vinegar, sugar, and salt on the stovetop and set that aside. When the rice has finished cooking and has cooled slightly, add the mixture to the rice and gently mix it together.

While your rice is cooking, wash all of your produce and then prep them according to the ingredients list.

Then it's the fun part, assembling the vegan poke bowl recipe and eating, yay!

Just assemble in several dinner bowls starting with the rice mixture, then add the produce on top, and add any additional toppings that you want. Then drizzle some vegan sriracha mayo or your sauce or choice on top and enjoy!

If you're planning on making this vegan poke bowl in advance or storing leftovers for later, I recommend doing the following:

Store the sushi rice separately from the veggies, edamame, and sauce. This will make it easy to reheat the rice without compromising the vegetables and sauce.

If stored in an airtight container, this healthy sushi bowl can be stored in the fridge for up to 4 days. The storing ability makes it a great option for a healthy vegan meal prep recipe.

If you enjoyed this recipe, be sure to try the other recipes next: 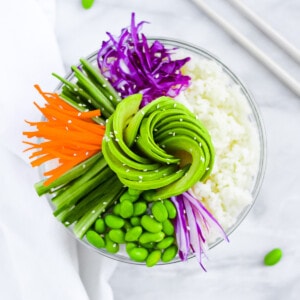 If saving for later, store in the fridge in airtight containers. Store the rice separately from the vegetables for easy reheating.  This can be stored in the fridge for up to four days.

About Planted in the Kitchen

Planted in the Kitchen is a plant based food blog. Here you will find healthy and delicious vegan recipes!

Welcome to Planted in the Kitchen